Some travelers are pilgrims (serious spiritualists), tourists (tour bus advocates), adventurers and thrill seekers (adrenaline rush junkies), or explorers (on-foot surveyors). My friends and I saw ourselves as simple, moderate explorers, not even treasure seekers. Cathy, Tilly, Jenn, and I decided to visit San Miguel de Allende, a new location for all of us. The three of them had traveled together the previous year. I invited myself along for this year’s expedition. They heartily entreated me to join them.

A neighbor of mine in Texas traveled to San Miguel with a native Mexican, as informal tour guide and reported that she found it disappointing, because stores, galleries and restaurants were behind gates and doors. To her it seemed closed off, hard to get a feel for the place, inaccessible.

I shared my neighbor’s experience with the other three women.  All seasoned travelers, we set our intention to get behind the gates of San Miguel. 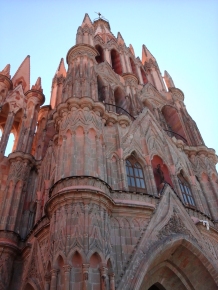 San Miguel de Allende is not a modern city, but an ancient colonial Mexican village, and as a result, it is built behind doors, gates, fences, and facades that then open up into courtyards that are surrounded by commercial shops or residences. In recent decades the village has grown into a tourist town, which then became home to thousands of artists of all stripes from North America, both the U.S. and Canada. The expatriate artist community today finds bountiful inspiration at a higher elevation in mid-Mexico, though sitting in a valley surrounded by distant, outlined mountains and fertile agricultural fields. The colonial village is known for its churches, cathedrals, and green spaces. The Parroquia, a primary landmark is not a cathedral, but the local parish church. Follow the parroquia link to see it in the midst of the city and as a Neo-Gothic example of architecture. The pink exterior makes it easy to find.

During the summer of 2014, Jenn researched flights and found a reasonable fare on Volaris. We booked. I called a friend in my hometown that travels frequently to San Miguel to ask recommendations for lodging. We booked the Hotel Quinta Loreta on her endorsement. We each took to the Internet to see what to do and see in the city for our trip.

Our itinerary started from the fishing village Isla Mujeres, Mexico, where we all spend a month or more each year. We ferried across the channel from Isla Mujeres to Cancún. Best Day shuttle took us to the Cancún aeropuerto, where we traveled by Volarias, a no frills Mexican airline to León, an hour and a half flight. No frills meant we carried backpacks for luggage and even had to buy water aboard the flight. We were an hour later than expected and had not made shuttle arrangements from León to San Miguel. Cathy approached a young man with a wife and baby, to ask if he spoke English and could he advise us. He spoke English and recommended we hail a taxi to the bus station and go from there by bus.

When we arrived at the bus station, we were weary and thirsty from our day’s travel—a low cost adventure for each of us. We could make out multiple bus lines—some we had heard of and others we had taken before. We understood the peso price ranges, but also realized that the wait time for even the cheapest one was costly in terms of wait time. We grumbled and debated.

Cathy walked outside, negotiated a cab ride, bargained with him, then he raised the price. I joined her and we ganged up on him to insist on the lower price. He conceded. We piled our backpacks in the trunk. Three of us scrunched in the back seat and let Tilly sit in front with the driver. Because she speaks Italian, she can make her way with Spanish better than the rest of us. She learned his nombre, Carlos, so we could at least be friendly enough to call him by name.

The car without adequate shocks bounced us through croplands and desert-like terrain with the mountains always in view. Sunlight followed us all the way to San Miguel and set as we arrived. The driver asked for an address and directions.

I had a name, Quinta Loreta Hotel, and an address, but oops, no directions. Because he was unfamiliar with the city, we suggested he drop us off in the center of town, circa de Artisan Mercado, next door to the hotel. He shook his head with disgust.

Carlos stopped at a gas station for directions. He then drove and drove, and looked this way and that way. Without a word spoken we knew he was as lost as we were.

It crossed my mind, could he be taking us on a wild-goose chase? Could he actually know his way and we become victims of a “give me all your money,” scam and dumped? Or worse?

Carlos asked another local taxi driver for directions. That seemed smart of him and reduced my fears. We rode until we were in an industrial looking part of town. Not yet panicked, it crossed my mind again, what if?

He asked another taxi driver. We turned around and headed in the other direction.

We were lost before we arrived.

By this time, we suspected he was fuming over the negotiated cost of the ride and the time he was killing not making another fare.

We arrived around 9:00 p.m. with cheers for him and gave him the agreed upon price and a substantial tip, hoping to appease him. We did not wait for his response to our tip.

The receptionist gave us keys to our rooms and vague direction to another restaurant, because  the hotel’s restaurant was closed. Worn-out, hungry, and fatigued from dehydration, we trekked out to find it.

Soon we heard American English-speaking voices, a couple out to find an Italian restaurant to which they had been directed. Yes, we would love to follow them the six- to eight-minute walk they had been assured it would take. We walked and talked; we looked and searched. Our energy waned. Finally, the couple determined that our 20-minute journey must not be the right direction. We walked back to our starting point. By this time of night, the gates of the city were mostly closed. The streets felt deserted. Our weary feet hobbled over narrow cobblestoned lanes cluttered with Easter-egg colored confetti. We speculated on the reason the streets were full of trashed confetti. We slowed our pace and wondered if breakfast would be our next meal.

Down the way, a light above a heavy wooden door slung back, to welcome us. A peek inside had the feel of Cheers—where everyone knows your name. People, hunched over tables, talked and laughed, as if they did this every night of the week.

We stepped inside out of the damp mountain chill into the warmth and savory aromas of the establishment. José stood waiting to serve us with humor and a quick wit; margaritas and molten volcano bowls of chicken

with cactus, pepper and onion arrived bubbling hot. We had arrived at Milagro and found sustenance behind a single gate in San Miguel on a cool February evening.

My return to the monkish room that evening revealed heat and A/C were not part of my accommodation. The stored blanket in the closet felt like the batting was lead. I thought, Ah, this should hold the heat in for the night.

I was chilled to the bone and took a quick hot shower that did not knock the chill from the room or my body, so I crawled into bed with my thermal Cuddle Duds shirt on. That should do it. After half an hour, I was up to find my TravelSmith  blanket and wrapped it around my feet and legs beneath the covers, like leg warmers. I had to scooch down because the maid had made the bed with no extra length to cover my shoulders. I’ll have to fix that tomorrow. I curled into a fetal position, pulled the sheet over my nose, and finally fell asleep.

It was no warmer the next morning.

Fiction and nonfiction writer, traveler, blogger, workshop facilitator. Author of coming-of-age travel memoir, At Home in the World: Travel Stories of Growing Up and Growing Away. View All Posts