Revision is the only way to improve our writing. — Rhonda Wiley-Jones

The only kind of writing is rewriting. — Ernest Hemingway in A Moveable Feast

Hopefully you saw the first version of this scene in the previous blog post, Drafting a Scene for my Novel. (If not, review it to get the most out of this post.) After taking it to my writers’ critique group yesterday, see my revisions below in red. They represent changes I made as a result of their comments and from my own need to clarify what I wanted to say. (NOTE: I use the word, Moslem instead of Muslim, because in 1906 that was the preferred word.)

Pastor John led the way out of Ramita’s front garden, leaving the sweet smells of flowers. John opened the gate for Fiona to the street and the offensive odors that would come. He stepped behind her and then to the street side of the path. Fiona followed his chivalrous behavior wondering what he was doing, until she recalled Ramita’s words, “Pastor John needs a wife.”

Awkward and uncertain about how to behave around this attentive man of God, Fiona attempted to make casual conversation. Her innate curiosity helped. “I see different kinds of lettering on shop doors. At first I thought them all the same, but after a few days of observing them, I think they are different languages.”

“You have a keen eye.” He pointed to a small sweetmeats shop and said, “That is run by a Moslem. The lettering is Urdu, one of several major languages and the language of Moslem speakers.”

Fiona tried the word on her tongue, “Ur-du. Right? That feels funny in my mouth.”

He laughed at her reaction and said, “You would like the taste of these sweets in your mouth as well. Bengal is known as the sweet tooth of India.”

Now standing in front of the bakery, he pointed out the wonders displayed. “That is called pathishapta. It’s a rolled pancake stuffed with a cream of coconut, milk, cream, and an ingredient from the date palm, jaggery. My boys love it. 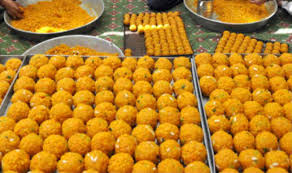 “See those ball-shaped treats? They are made from a condensed milk and coconut, and often made to celebrate Lakshmi Puja.”

“A prayer ritual, usually performed during Diwali, a major Indian festival. The third day of Diwali is considered auspicious and set to greet the god Lakshmi. They believe that the goddess of wealth, Lakshmi, comes to bestow gifts and blessings. She is thought to revere cleanliness, so devotees clean their houses and decorate with lights, and prepare delicacies as offerings. The more satisfied she is with the visit the greater the blessings, wealth and prosperity the household will attract during the next year.”

“Do they celebrate once a year or more often?”

“Only during the Diwali festival. But there are many festivals throughout the year. Unfortunately, there are no festivals while you are here. And that’s a shame. I wish you could experience one of them.”

“Yeah, me, too. And what is that?” Fiona said, pointing to another round treat.

“That’s a rasgulla. Of all things, it is a ball of unripened cheese soaked in sugar syrup. Actually, it’s pretty good.” He pointed to another item. “The malpoa has different versions. The one made in here in Bengal is a cream pancake deep fried with raisins and syrup applied later. That was Martha’s … ”

He stopped himself abruptly and then apologized. “I shouldn’t speak of my wife to you.  It’s not my place to burden you with my memories.”

“No, no, that’s okay. You will always remember her fondly and why wouldn’t you?”

He pointed to a tobacco shop across the street and said, “Now see that smoke shop over there? That is run by a Hindu, because the lettering is Hindi. In missionary language school before getting Calcutta I learned that Hindustani is the mother language of Urdu and Hindi.”

Fiona tried to walk in the crowded streets without touching John’s shoulder, but she felt the moist skin from his arm from time to time. She stiffened when he reached for her hand. In tight places he slid his arm behind her and nudged her forward. She took measured steps.

“Ironically though, Urdu is written from right to left; and Hindi, from left to right, like we write. Hindi takes many words and expressions from the Sanskrit and Urdu more from Persian.”

“It looks nothing like our alphabet. How many letters does it have?”

“In Urdu, over thirty consonants and at least twenty vowels. Then in Hindi about twenty-eight consonants and thirty-five vowels. Of course, then there are exceptions and combination of letters, much like we have the “oy” sound for the words joy or voice. The written script may be different in the two; but if you speak one, you understand the other when it is spoken.”

“That doesn’t make sense to me. They seem…”

“Yes, even paradoxical. Do you speak either?”

“I studied Hindi, but can’t say I’m fluent; I stumble along if a native speaker is patient.”

They stepped prudently around a Brahma bull lazily chewing its cud and ignoring them. Fiona from the top of the ghat, man-made stone steps from the upper street level down to the river, looked down to see women washing clothes, while locals and pilgrims bathed before prayers. The wide passageway led down to the Ganges, the holiest of all rivers, or in this case the Hooghly, a diversion from the mother of all Indian rivers.

“I’m so tall and white; so out of place, like a pot roast at a bake sale. What’s the word for foreigner?”

“Pardesi, which is Hindi. Though this is the Indian continent, did you know there is no such thing as an Indian race?”

Fiona cocked her head, puzzled. “But they are all dark skinned.”

“Yes, more than you and me, but the range of color is golden to mahogany to black. The Aryans are fair-skinned, more like us; while the Dravidians are Negroid typed.” He saw her perplexed face. “It is believed that Dravidians from the South invaded the North and then integrated, marrying lighter-skinned Aryans;  creating many skin tones.”

“And those two strains of people have inter-married with Mongolians from north of India. When you take into account all these factors, you will see why Indian complexions vary widely.”

Avoiding the marriage subject, she said. “I suppose sun exposure deepens the skin tone, as well.” Then she sniffed the air, like a dog and asked, “What is that  strange scent? I see men smoking pipes and dipping snuff from gourds or pouches, but this scent is unfamiliar.”

He looked about and then pointed to an old gentleman pulling a long drag from an elaborate silver hookah. The device, elegant and expensive, sat in stark contrast to the man with tattered clothes. His only other possession appeared to be an amulet pouch on his belt. The turbaned man with eyes closed sucked on a tube from the instrument.

“Hook-ah, you call it. What is opium, like tobacco?”

“Similar, but more potent. Historically it may have been used by priests or healers to produce effects that made them seem like men with special powers. Today it’s used by pilgrims and priests to attain a meditative state.”

He guided her closer to the contemplative. “In addition to its prevailing use as anesthesia and a painkiller, doctors use it to treat respiratory and stomach ailments.”

Fiona  pointed to the man. “He seems to be lost in thought. Why do you think he is using the hookah?”

“He might say he’s trying to get closer to God.” He chuckled and then sobered.  “I would say there is only one way to God through Jesus Christ. Prayer also helps.”

Fiona  fought her discomfort fueled by his closeness and attention. She fiddled with the compass in her pocket that she found after thinking she had lost it on ship. The compass had been Uncle Louis’  parting gift  to Will. And he  left it with her so she could find her way in the world without him.

The compass reminded Fiona of how much she had wanted to make this trip with Will. It provided the only certainty she had about anything right now. North was always north.

THE PROCESS OF REVISION

Can you see the improvement in the second version of the scene, especially the added paragraphs of new content the group wanted to see in the scene?

What is your experience working with a feedback from other writers or readers?

Wiley-Jones, fiercely committed for thirty years to guiding travelers toward supercharged benefits of writing to unlock the keys to transformative travel, will unpack journal-writing methods with which you can experiment. Wiley-Jones is an accomplished writer with 1) a coming-of-age travel memoir, and 2) an historical travel adventure novel; as well as multiple publications in national anthologies and local lifestyle magazines. She can facilitate techniques for you to write stories for yourself, your family, and/or for publication. View All Posts